Back to Table of Contents
Modifiers

This page provides a concise, quick reference for the modifiers.  Many of them will be expanded upon in other areas of the text.

The figure below shows one example of a Maximum Material Boundary

Below is an example of MMC and MMB for an external Feature of Size.  The MMC size is the largest size, and the MMB is the boundary perpendicular to datum [A].  The diameter of the MMB is equal to the MMC size plus the Perpendicularity tolerance.

The figure below shows one example of a Least Material Boundary

Below is an example of LMC and LMB for an external Feature of Size.  The LMC size is the smallest size, and the LMB is the boundary perpendicular to datum [A].  The diameter is equal to the LMC size minus the Perpendicularity tolerance.

The datum translation symbol is the triangle shown in the far right box of the feature control frame above.  It indicates that the datum feature simulator for the [F] datum is free to translate.

If the part is gaged with two round pins at [E] and [F], then the gage will treat these two holes equally.  Both holes together will take out the translations in the X and Y and the rotation around the Z.

The datum translation symbol allows a gage to be used that has pins for both holes [E] and [F] with the pin for hole [F] being free to translate.   With [F] free to translate, hole [E] will take out the translations in the X and Y directions and hole [F] will take out only the rotation about the Z axis.  Thus the part will be constrained exactly as intended by the feature control frame.
In the diagram below, if there were no modifier on the callout for datum [C], the datum simulator would be within the range specified by the profile tolerance, wherever it can make maximum contact with the datum feature.

The figure below shows an angularity callout.  Angularity requires that the surface be between two parallel planes that are 2 millimeters apart and exactly 20 degrees from datum [B].

The figure below shows that this particular surface fails the requirement because it falls outside the planes.

In the figure below, the tangent plane modifier is used.  Now the requirement is met because a plane tangent to the surface fits between two parallel planes that are 2 millimeters apart and 20 degrees from datum [B].

The profile tolerance defaults to equally disposed about the true profile.   Sometimes it may be desirable to have the tolerance zone unequally disposed about the true profile. In previous versions of the standard, a basic dimension to a phantom line indicated the tolerance zone.  This method is still legal in the 2009 standard but not in the 2018 standard.  In the 2009 or 2018 standard, one can use the U in a circle as indicated below.  The number immediately following the unequally disposed symbol indicates the amount of tolerance outside the material. 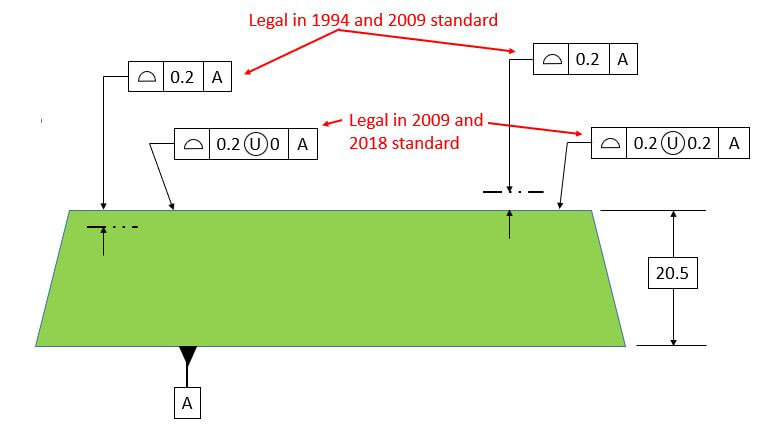 The 2009 standard permits the use of a profile boundary that is any shape required by the user.   The Non Uniform Boundary is shown below.  The boundary is described by basic dimensions and phantom lines.   In the figure below, the solid line represents the true profile.

The Tolerance Of Position requires that the axis of the dowel hole be contained within the 0.2 dia tolerance cylinder.

The Tolerance of Position requirement mentioned above allows the dowel hole, and therefore the dowel, to tilt within its tolerance zone. If there is a cover as shown below, a conflict can occur between the dowel and the cover.  The same situation applies to a threaded hole with a bolt that must clear a hole in the cover.

With the axis of the hole (and therefore the pin) inside the projected tolerance zone, the conflict is gone.

The standard says: "Statistical Tolerancing is the assigning of tolerances to related components of an assembly on the basis of sound statistics"  It goes on to list some examples.  However, when you just put the symbol on a drawing, it does not specify specifically which statistical tools must be used.  Therefore it is ambiguous, and I always recommend that people not use it.  If you want to specify a statistical requirement on a drawing, you should explicitly state what the requirement is.

Recall that rule #1 specifies a boundary that a Feature of Size is not allowed to violate.   In the top row of the diagram below, the Feature of Size has a boundary 11 wide that it is not allowed to violate.   If the part is made at 11, it must be perfectly straight.  If it is made between 10 and 11, it can be bowed as long as the part does not violate the 11 boundary.

In the bottom row, the Independency  symbol is used.  The part must still be between 10 and 11 wide at any given point.  However, now the part can be 11 wide and still be bowed.  As it is specified below, there is no limit to how much the part can be bowed. It is adviseable to include some other way of limiting the flatness error when overriding rule #1 with the independency symbol.

Below are the two most common uses for Continuous Feature.

In the second case, with the CF applied to the cylinder, rule number 1 applies as if it were all one cylinder.

The all around symbol indicates that the profile tolerance applies all around the shape in this view.

The all over symbol indicates that the profile tolerance applies to every surface of the part.  Note that in this case, no datums are specified.  The part should be suspended in space and compared to the 3-D CAD model.  The most common application for this symbol is castings in their as cast condition.

This is used with orientation tolerances.  The term "Each Element" specifies that the tolerance applies to individual line elements rather than the whole surface at once.

This is used with orientation tolerances.  It specifies that the tolerance applies to radial elements as shown below.