Flatness
Back to Table of Contents

Applied to a surface

Applied to a center plane

Applied to a surface

Nicholas likes to sleep on a nice, flat surface - preferably carpeted.   But how flat is flat?

we define flatness by specifying that a surface must fit between two parallel planes that are a specified distance apart.  The flatness callout is as shown below. 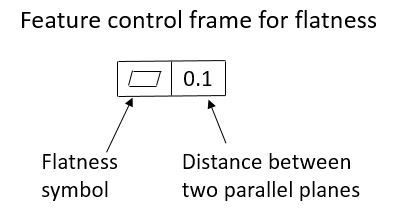 When we look at a surface closely enough, it will never be perfectly flat.  But our flatness control tells us that the wavy surface must fall in between two planes the specified distance apart as shown below.

Note that flatness never has a datum callout.  None of the form tolerances have datum callouts.  Something is either flat or not flat on its own.  It is never flat relative to something else.

Flatness can apply to either an outside surface of a part or a centerplane.

When flatness applies to an outside surface, the feature control frame points at that surface or is on an extension line connected to that surface. 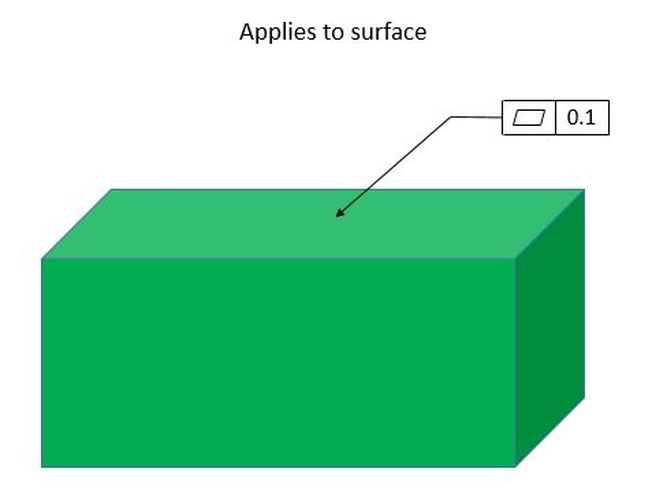 The surface then, must fall between two parallel planes that in this case are 0.1mm apart. 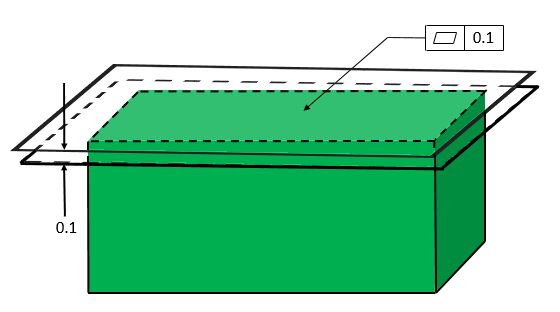 Note that when flatness is applied to a surface, it does not affect the size of the part. 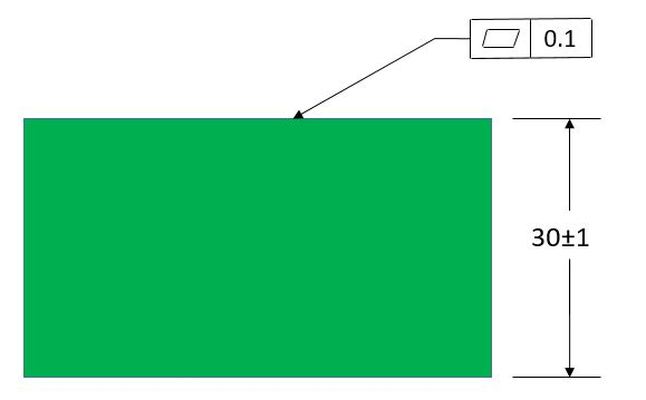 The size can never be greater than 31 or less than 29.  Note below that when the part is created at size 31, the form must be perfect per rule #1.  Therefore the tolerance zone has its top plane at 31 and its bottom plane at 30.9.  Flatness applied to a surface never affects the outer boundary of a part.

When the part is size 29, it can never be less than that.  So the bottom plane of the flatness tolerance will be at 29 and the top plane will be at 29.1.

When we apply flatness to a surface, we can also do a refinement.   We can apply our flatness control as below.  The top line specifies a 0.3 wide tolerance zone that covers the entire surface. 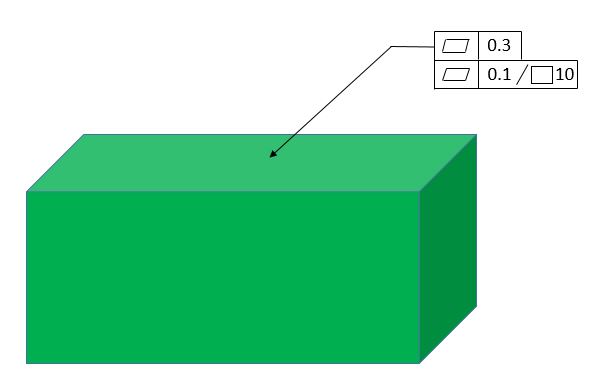 Note that instead of a square symbol in the lower line of the straightness control, we could have used a diameter symbol.  In that case each 10 diameter circle on the surface would be required to fall between two parallel planes that are 0.1 apart. 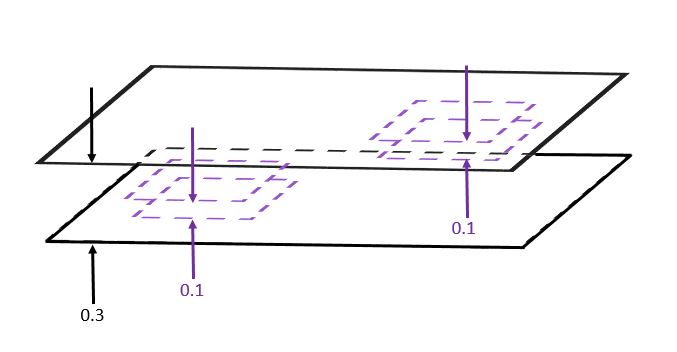 Applied to a center plane

In the figure below we see that something we call the Derived Median Plane is what must fall within the tolerance zone.  Once we acknowledge that the center plane is not really a plane, we must call it something else.  The Derived Median Plane gets its name from the fact that it is derived by taking a bunch of two point measurements and having all of the median points of those measurements form a plane that is not really a plane.

All of this is very confusing and difficult to measure.  So we tend to focus our attention on the fact that the part can now be at its MMC size and still have the specified form error.  Therefore the new boundary that it cannot violate is equal to the MMC size plus the flatness tolerance which in this case adds up to 31.1.

We can now introduce the concept of Bonus Tolerance.  In the figure below, we have the MMC symbol inside the feature control frame.  Without that symbol, the flatness tolerance was Regardless of Feature Size  (RFS).  So until now the tolerance zone was 0.1 no matter if the actual part were produced at its MMC size of 31 or its LMC size of 29 or anywhere in between.

The concept of never violating the virtual condition boundary helps us with gaging the part.   As long as the size of the part falls within the size limit everywhere on the part, we can test for the flatness by passing the part between to planar objects that are exactly 31.1 apart.  If the part is within its size limits and it passes between the two planes 31.1 apart, then we know it meets its flatness requirement.
It works the same way for slots.  The slot below has a flatness callout below the size dimension.  That means that the flatness tolerance applies to the center plane of the slot. 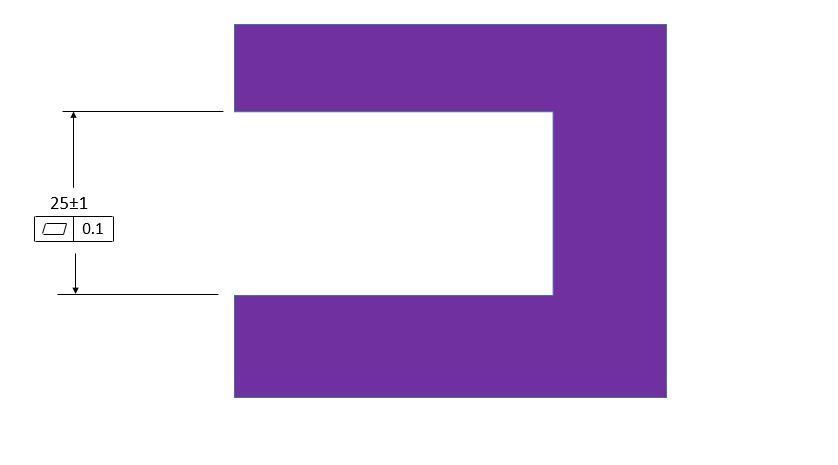 The figure below shows the slot at its MMC size with the max allowable flatness error. The derived median plane must fall between two planes that are 0.1 apart.  The slot will never violate a constant Virtual Condition boundary of 25-1-0.1 = 23.9

Since there is no MMC modifier in the feature control frame, the size of the tolerance zone is constant regardless of whether the slot size produced is at MMC or LMC or anywhere in between. 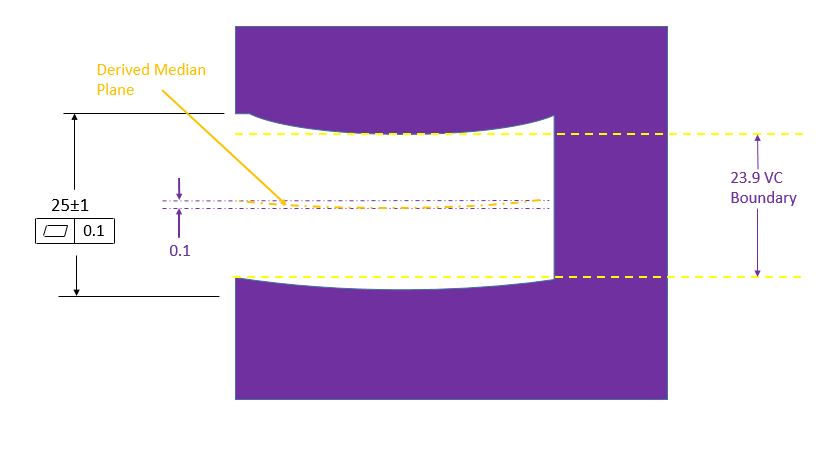